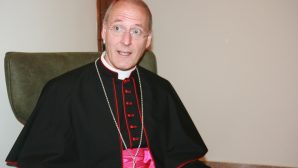 Mgr Paul Fitzpatrick Russell, the Apostolic Nuncio to Ankara, who evaluated the meeting of President Recep Tayyip Erdogan and Pope Francis, expressed his confidence for this meeting which would bring good things.

Mgr Russell spent the last week in Iskenderun and Mersin regions. While staying here, Russell, met with the faithful of the local parishes and got also information about the situation of Anatolian churches and the region from the Apostolic Vicar of Anatolia, Bishop Paolo Bizzeti.

Evaluating the meeting of President Erdogan and Pope Francis, Mgr Russell stated to SAT-7 TÜRK “The Vatican and the Republic of Turkey established their official diplomatic relations in 1960 and since then until now almost all the popes visited Turkey. However, this is the first time that a President of the Republic of Turkey will visit the Vatican. We have a diplomatically friendly relation. I believe that this meeting will be beneficial for both Turkish people, Catholics and all other people. Because the two sides have an important role, we have a joint working point. Everyone wants peace in the world. Our other common points are our faith points. We are faithful people, Christians and Muslims! This is a meeting point: may they live better, more fraternally, and others take this relationship as an example. We can often see it in history as well, when people really come together, when we live in unity, very nice things can come out from this association.”

Nuncio Russell also expressed his belief that the most important reason of the meeting was ‘Jerusalem’; “I think the reason for this meeting is the situation of Jerusalem. In the history, we see that since the very beginning, the Vatican has always thought that Jerusalem should be open to all. Mr. Erdogan was also aware that the Vatican’s way of looking at it was the same. President Erdogan personally called the Pope and spoke on the phone about this issue and demanded a meeting. Everyone is always welcome to the Pope’s gate, he is gladly waiting for Erdogan. Jerusalem is ‘Holy Land’ for all, for all beliefs. Everyone has the right to stay there, Christians, Muslims and Jews.

The second thing I think is the way faithful people live. We have to find a common way that all people can live together and brotherly.

The third issue is the position of Catholics in Turkey. Catholics are particularly problematic in terms of property, and for that reason I can offer a long list if necessary. I hope this meeting will also be useful in this regard and will bring fruit. The status of the Catholic Church in Turkey can be formalized.

The fourth issue is the status of refugees. There are more than 3.6 million refugees in Turkey. What will be their future? They can go back, but if they do not, how will they live? Especially the Christian refugees who work in very difficult conditions must be talked about.”

Need to Find the Solution through the Dialogue, War brings Death

Russell, who answered our question related to the mobility at the Syrian border, stated that war cannot solve the problems: “War is not the best way to solve problems! It is necessary to go through the dialogue and it is necessary to find a solution. Because in the war, the people die and the families become miserable. This thought is a reality for Hatay and for the borders of all the world.”

Russell also talked about the situation of Christians living in our country; “Christian community in Turkey is not very crowded. The number of Iraqi Christian refugees in Turkey now is almost equal to the number of indigenous Christian citizens. The number of Catholics in Turkey is around 30 thousand, so it is a small congregation. Those who believe in Christ Jesus have lived in this land since the first years of Christianity. For us, these lands are holy and we have the right to live together. We are a part of this people. If we are here, it is an indication of your wealth. “