Archbishop Aram Atesyan participated in the ‘Living Together’ Panel in Antioch 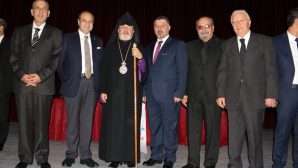 The Armenian Patriarcal General Vicar Archbishop Aram General Atesyan, participated in the conference entitled “Living Together” organized by the Diriliş (Resurrection) Youth Federation in Antioch. The conference was attended by the former Minister of State and of Europe Union Egemen Bagis.

In his speech, the former Minister of European Union and of State Egemen Bağış stated that he was very happy for being in such a meaningful meeting in which the messages that would contribute to the unity and solidarity of our country were being given one after the other.