This is the square where we are the strongest! 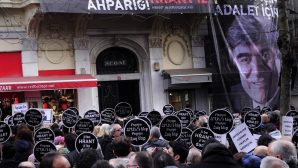 In the 12th year of his murder, Hrant Dink was commemorated with the participation of hundreds of people in front of the old building of the Agos newspaper, where he was shot.

Many people, no matter they are Turkish, Armenian or Kurdish shout the slogan “We are all Armenians!”

The program started with the presentation of Bülent Aydın from the Friends of Hrant. Armenian songs, including the Sari Gyalin were listened. Bülent Aydın encouraged the people to shout slogans “It doesn’t finish before we say it is finished”, “We all are Armenians, we all are Hrant!”, “May those who ordered his murder be judged”, “Long live the brotherhood of peoples” and “For Hrant, for justice!”

“Although my heart was there on January 19, it is a great sorrow for me not seeing Hrant’s family and my dear Rakel Dink, and not being among Hrant’s friends. While I am away, on January 19, I feel more how important it is to demand justice for Hrant. As we look at Hrant’s picture, at his shining face, we see an honorable man who is killed in our country. When we hear his warming voice, we remember all the injustices and massacres which took place in our country. We want to feel the honor of being a citizen of a lawful state. Twelve years ago, we saw how easily people could point their guns at their brothers. The murder of Hrant forces us to think more about how to prevent a child from becoming a murderer. The murder of Hrant brings us the responsibility to fight for equality, freedom and brotherhood. We will be with Hrant for these, we will get power from Hrant“ said Osman Kavala in his message.

After Bülent Aydın said “In this country, in the uneasiness of pigeons, we do not want to live with assassinations that have no real perpetrators”, the voice of Hrant Dink was listened, telling an event that he lived.

On behalf of the group called “Friends of Hrant”, a friend of him made a speech. Filiz Ali, the daughter of the great writer Sabahattin Ali, who was murdered on April 2, 1948, expressed the following in his speech for Hrant Dink:

“We stand in front of the Agos, the newspaper you build with your hands, to stand beside you and your family against the darkness that has taken you away from us.

My father, who was lost in custody and still we do not know what happened, was unfortunately neither the first nor the last loss in the history of this country.

Following the murdered journalists, writers, artists, scientists opened wounds in the heart of the community that became deeper and cannot be cured in any way. January reminds us the murders of Onat Kutlar, Metin Göktepe, Uğur Mumcu, Muammer Aksoy; they look at us from the cold of January. There is Abdi İpekçi in the frost of February.

But there is a natural and immutable fact in the universe as the sun rises in the morning: the memory. Human memory does not forget the loss and destruction of its values.

You, all the values that ​​we have lost, you are looking at us from the frost of January and we are continuing to say ‘we do not give up’ with a crowd of young people every year. Hope is here, this land is ours, this country is ours.”

During the program, it is also announced that the 88th trial of the murder case will be held next March. Bülent Aydın called for demand for justice for Hrant Dink as “Be on guard duty for justice”. He encouraged people to shout slogans again. Then, he continued his words “Laying claim to the cause of Hrant Dink is to continue the struggle according to his dreams. Hrant wanted peace and justice in this country. Moreover, he wanted this throughout his life with the language of peace and truth. Let’s face the past and set up a common future. Hrant Dink, therefore, is the symbol of hope and hope. We are people who believe in the power of the language of peace. Never let your voice be cut, this sea of ​​conscience always existed in this country. You, Hrant’s friends, people with conscience, those lay claim to justice; Thank you.” (SAT-7 TÜRK / Dilara AĞABAPYAN)

Tronos Choir gave a concert at the St. Anthony’s Church

Armenian Patriarchate of Turkey prays for the Turkish Army

Celebration of Hanukkah-Feast of Lights in Antioch

The Festival of Saint Translators was Celebrated with the Holy Mass