Armenians of Turkey Celebrate the Entrance of Jesus Christ into Jerusalem 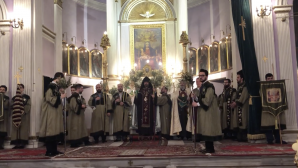 The Sunday of the Entrance of the Lord into Jerusalem (Dzağgazart) was celebrated under the auspices of the Patriarch Sahak II at the Patriachal Cathedral of the Virgin Mary.

On Sunday, April 05, the Entrance of the Lord into Jerusalem (Dzağgazart) was celebrated by the Patriarchate of Armenians of Turkey, at the Patriarchal Cathedral of the Virgin Mary, under the auspices of the Patriarch Sahak II. During the Holy Mass, the Eucharist was presented by Rev. Father Shirvan Mürzyan.

The ritual, which held without attendance of the congregation due to the corona virus measures, was also trasmitted to the believers via a live broadcast from the Patriarchate’s Facebook account.

At the end of the mass, his Patriarchs gave messages about this special day in his sermons in Armenian and Turkish.

The ceremony ended with the Our Father in Heaven prayer.

Due to the Covid-19 virus, which surrounds the world and our country, the Holy Week and Easter rituals are being held in churches and transmitted to the congregation via social media.

The Entrance of Jesus Christ into Jerusalem (Dzağgazart or the Palm Sunday) celebration of the Armenian Catholic community was held at the Taksim Hovhan Vosgeperan Catholic Church closed to the public as part of the Coronavirus measures. The parish priest Fr. Vartan Kazanciyan, Fr. Abraham Firat and deacons were present at the mass broadcasted via social media.

Some verses recited on the Feast of Dzağgazart are:

Rejoice greatly, Daughter Zion!
Shout, Daughter Jerusalem!
See, your king comes to you,
righteous and victorious,
lowly and riding on a donkey,
on a colt, the foal of a donkey.
I will take away the chariots from Ephraim
and the warhorses from Jerusalem,
and the battle bow will be broken.
He will proclaim peace to the nations.
His rule will extend from sea to sea
and from the River[b] to the ends of the earth.

As they approached Jerusalem and came to Bethphage on the Mount of Olives, Jesus sent two disciples, saying to them, “Go to the village ahead of you, and at once you will find a donkey tied there, with her colt by her. Untie them and bring them to me. If anyone says anything to you, say that the Lord needs them, and he will send them right away.”

This took place to fulfill what was spoken through the prophet:

“Say to Daughter Zion,
‘See, your king comes to you,
gentle and riding on a donkey,
and on a colt, the foal of a donkey.’”

“Hosanna to the Son of David!”

“Blessed is he who comes in the name of the Lord!”

“Hosanna in the highest heaven!”