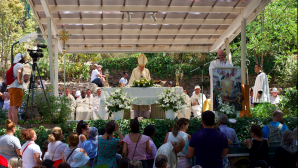 Like on 15th of August each year, Mary’s Feast of Ascension was celebrated also this year, with the attendance of a crowded at the Virgin Mary’s House located in the Selçuk District of İzmir.

Opening prayer was done by a Syriac priest from Istanbul, Rev. Fetros Gülçe in Aramaic. Many believers from the Armenian Orthodox and Syrian Orthodox Churches attended the liturgy. The Archbishop Cardinal of Lyon Philippe Barbarin and his delegation, the Latin Catholic Metropolitan Archbishopof Izmir Lorenzo Piretto, the Honorary Consul of France in Izmir Zeliha Toprak, Turkey Representative of the Embassy of France and President of the House of the Virgin Mary Association Noel Micaleff , Selçuk Municipality officials and guests from different religions were also present.

The mass was led by Cardinal Philippe Barbarin.

At the sermon, important messages were given to the participants about the Mary’s power which brings unity, peace and fraternity. After the Eucharistic celebration, the grapes are blessed and distributed to the crowd. (SAT-7 TÜRK / İzmir)

His Beatitude Patriarch Sahak II was Enthusiastically Welcomed in Vakıflıköy

The Candidate for 85. the Armenian Patriarch of Turkey, Bishop Sahak Maşalyan met with his delegates

Feast of Naming Jesus Christ in the Armenian Catholic Churches