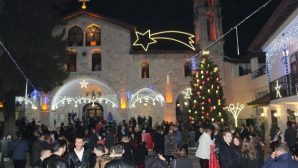 The first mass in Iskenderun was held at the St. Nicholas Orthodox Church. The celebration was led by Rev. Dimitri Yildirim. Christians and many non-Christian visitors living in Iskenderun participated in the ceremony.

In his sermon, Father Dimitri Yıldırım wished the Christmas bring peace, unity, togetherness and blessings in Turkey and all over the world.

The church chorus sung the hymns praising God and the candles were lighted.

A celebration was held at the Catholic Church of Annunciation in the Iskenderun district of Antioch. The mass, led by Bishop Paolo Bizzeti, accompanied by Father Martin Kmetec. The Parish Priest of Iskenderun Karasun Manuk Armenian Church Rev. Avedis Tabashian was also present.

A solemnity mass was held also in the Orthodox Church of Antioch, celebrated by Rev. Jan Delüller and Rev. Dimitri Doğum.

Joint Statement from the Minority Representatives