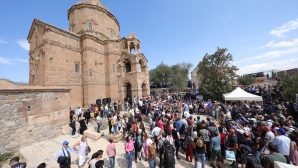 The Holy Cross Church in Aktamar Island in the Van Lake, which is being opened for worship once a year with the special permission of the Ministry of Culture and Tourism, hosted the Holy Mass for the sixth time after a break of 3 years.

The liturgy which is led by the Armenian Patriarchal Vicar in Turkey Archbishop Aram Ateşyan endured for about 2 hours. Many people attended the celebration, coming from both Turkish cities and abroad. The faithful who came to the mass were taken into the church in groups due to the limited space.

The Armenian Patriarchal Vicar in Turkey Aram Ateşyan in his speech thanked the President Recep Tayyip Erdogan, the Minister of Culture and Tourism Mehmet Nuri Ersoy, the Governor Van and the Metropolitan Deputy Mayor Murat Zorluoğlu.

The Holy Communion was distributed by the Archbishop Ateşyan and the accompanying clergymen to the faithful. A music band coming from Armenia performed hymns.

The Patriarchal Vicar Archbishop Ateşyan said that the city of Van is a peaceful place. He added, showing the pigeons in his hand, “I am thinking on the Prophet Noah while I as holding the pigeons in my hands. Noah could not open the doors of the ship, because the ship was struggling with waves. Even when the ship stopped at the top of Mount Ararat, he could not open the door. He sent pigeons from a small window. The pigeon came back with a small piece of olive branch. ” Atesyan said that he wishes that the pigeons always make peace in the sky of this country, protect the nation the politicians from the evil.

The last religious celebration in the island had took place in 20015 with the participation of thousands of tourists coming from both Turkish cities and abroad. Later, the ceremonies were canceled for three years due to the security reasons. (Gündemhaberleri)

A Big Loss for the Catholics’ of Izmir