“Harisa” festivities were held in Kınalıada 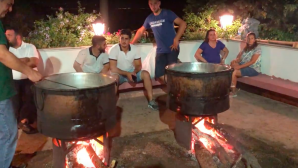 Like every year, the only Armenian village in Samandağ district of Antioch hosted the Harisa (Keşkek – a traditional local food) festivals, which were celebrated with the Assumption of Mary festivities. It is believed that the purpose of the festivities is to commemorate the Armenians of Musadağ who migrated in 1915 and 1939 and are lost on the migration routes.

For the last 5 years, the Surp Krikor Lusavoriç Armenian Church administration in Kınalıada is organizing the same festivities in Istanbul, in Kinalıada church garden with the cooperation of Vakifli Village Meryem Ana Kilisesi Foundation and the Vakıflı Village Development and Solidarity Foundation.

This year, all the Harisa materials including the boilers were brought from Vakifli and set up in the garden. In the evening, the festival started with the blessing of the salt by Archpriest Tatul Anushyan, Archpriest Yeğişe Uçkunyan, and the priest Mağakya Beskizyan. The Honorary President of the Foundation of the Vakıflı Village Mihran Uliyan gave a speech and singer Bartev Garyan performed. At 22.00, Bedros Kehyaoğlu, the president of the Women’s Cooperative lighted up the fire of the boilers. The Armenian residents of Kınalıada showed intense interest in the event. At the end of Sunday mass, the Harisa was distributed to the people after the blessing of the by Armenian Deputy Patriarch Aram Ateşyan. (SAT-7 TÜRK / Kirkor Dinçkayıkçı)

Antioch – Altinözü Sarılar neighborhood is being prepared for the festival