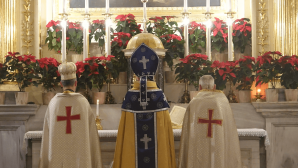 The celebration of the feast of Saint Hagop was held at Taksim Surp Hovhan Vosgeperan Church and it was presided by Monsignor Levon Zekiyan, Archbishop of the Armenian Catholic Church, accompanied by Archpriest araev. Vartan Kazancıyan, Archpriest. Rev. Abraham Fıratyan and the clergy. The ceremony was attended by the executives of the Surp Agop Foundation and the intensive participation of the congregation. Istanbul Mayor Ekrem İmamoğlu also sent flowers due to this feast.

Following the ritual, the Vosgeperan Library was opened with prayers.

Who is Surp Hagop?

Surp Hagop was born in the 3rd century AD as the son of Prince Gefal of Armenia. He studied Philosophy, Theology and Philology. In his youth, he lived a very strict ascetic life in the mountains near the Persian and Roman Empires around the city of Nisibis (Nusaybin). He spent all his time in prayers and conversations with God.

He was glorified with a bold confession of faith during the persecution of Emperor Maximian (284-305). Because of his strict and pious life, the inhabitants of Nisibis chose him as the bishop of the city.

Saint Hagop was among the Fathers of the First Ecumenical Council and one of the foremost defenders of the Christian faith. He built a theological school in Nisibis where he served as an instructor, a clever and educated pastor. He had a strong influence on the hearts of his listeners with high morals throughout his life.

Enthusiasm of the Easter Celebration in Mardin