Turkish Armenian Spiritual Chairman of the Board visited Vakıflıköyü in Hatay 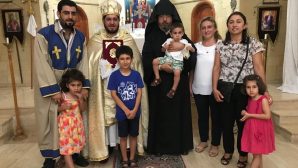 The head of the Religious Council, High Priest Tatul Anusyan, visited Vakıflıköy and presided over the Sacred Offering Rite on Sunday.

Turkish Armenian Patriarchate Spiritual Chairman of the Board, High Priest Tatul Anuşyan visited Vakıflıköy from July 31st until August 3rd. He was greeted with enthusiasm and affection by the people of the village and the church clerk, Father Avedis Tabaşyan.

Having received information about the preparations for the Surp Asvadzadzin (Virgin Mary) Festival that will take place on Sunday, August 16, Abbot Anuşyan also visited the Vakıflıköy Museum, which will be opened in the village, and presented his appreciation.

On Sunday, August 2, İskenderun Karasun Manuk and Vakıflıköy Church Father Avedis Tabaşyan presented the Sacred Offering Rite at the Church of Virgin Mary (Surp Asdvadzadzin) in Vakıflıköy. Chief Priest Tatul Anusyan, the Head of the Religious Board of the Mass, presided and preached during the rite. At the ceremony, which attracted the attention of the village people, senior readers and readers of the village people presented the hymns.

At the end of the ceremony, a table consisting of local delicacies was presented to the High Priest Tatul Anuşyan. During the meal, High Priest Anusyan, who also had pleasant conversations with the religious official, readers and the villagers, took a rest, very pleased with his visit.

Meanwhile, Armenian Patriarchate of Turkey continued to broadcast the presentation of the Sacred Offering and the sermon of His Beatitude Sahak II on their Facebook page.

While Senior Father Krikor Damatyan performed the Sacred Offering rite on Sunday, August 2, some Priests, Fathers, Deacons and readers from the Office of the Patriarchate were also present.

Armenian Patriarch of Turkey His Beatitude Sahak II, gave two sermons, both in Armenian and Turkish. In his sermons, which he started by reading Chapter 19 of Matthew, he talked about the issue of marriage and divorce.