A Big Loss for the Catholics’ of Izmir 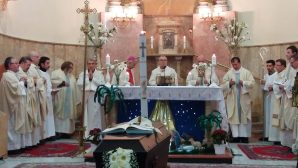 Dominican Priest Stefano Negro died yesterday (January 4, 2017) at 01:00 a.m. in Izmir. He started his mission in Izmir in 1976 at the most crowded local church in İzmir, Holy Rosary Catholic Church and at the same time he served as the General Vicar and the Chancellor of the Metropolitan Archbishop of the Roman Catholic Church of Izmir for many years.

Father Stefano Negro has been ill for about two weeks and was hospitalized at the İzmir Private Su Hospital under intensive care. According to the information approved by the Metropolitan Archbishop of the Latin Catholic Church of Izmir Monsignor Lorenzo Piretto, the funeral of Father Stefano Negro will be held at the Alsancak Holy Rosary Catholic Church on Saturday January 7, 2017 at 11:00.