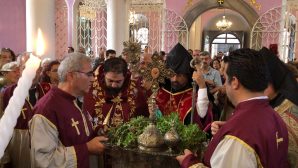 The Feast of Khachverats, the Feast of the Exaltation of the Holy Cross which is one of the five great festivals of the Armenian Apostolic Church, was celebrated with enthusiasm in Istanbul.

The celebration took place in the Balat Surp Hreşdagabed Church, which is also known as the Church of Miracles. The liturgy was led by the Rev. Father Bedros Buldukyan under the auspices of the Patriarchal Spiritual Committee President Bishop Sahag Maşalyan. During the service, the Rev. Fr. Zadik Babikyan, Deacon Nişan Çalgıcıyan, Deacon Berç Kaç, Deacon Levon Kuyumcuyan, Deacon Sarven Bıçakçı and the readers of the church accompanied the prayers. The hymns were performed by the Gedikpaşa Zıvarnots Chorus, directed by the maestro, the senior reader Kevork Çağlıçubukçu.

Bishop Sahak Maşalyan, in his sermon which he gave in Armenian and Turkish, explained the history of this feast, the meaning of the Cross for the christians and the importance of its preservation.

In 327, the Cross on which Jesus was crucified is found in Jerusalem. The Byzantine emperor Constantine and his mother, Saint Helena had built a big basilica on the Golgotha ​​Hill where Jesus Christ was crucified. This Cross was put in this church which was one of the largest temples in the world in that time. In 614, with the attack of the Persian Empire, Jerusalem was plundered and the Cross in the temple was taken to Iran. This was a shock in the Christian world. The Byzantine emperor Heracles, who prepared the war for 14 years, moved his great army towards Iran with the participation of the Armenian soldiers in 628. The Persians who lost all the battles returned the Cross and ended the war. While the Cross was being brought to Constantinople, it has been welcomed in all the settlements of Anatolia where it passed, by the faithful with basil flowers. The Cross was brought to Constantinople and then sent to Jerusalem and put back in the temple. The Armenian Apostolic Church added this historical event to its liturgical calendar and celebrates it as one of the 5 major feasts. During the ceremony on this Feast day, the church is being decorated with basil flowers, the four directions (east-west-north-south) are being blessed in the Church with the cross. At the end of this special liturgy, the flowers are being distributed to the faithful.

SAT-7 Stands With Beirut On Screen and on the Streets

President Erdogan is going to visit the Vatican
ZİYARETÇİ YORUMLARI