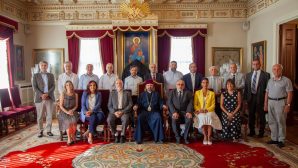 “At the meeting of the on 30 September, it was decided to hold a meeting with broad participation.

At the meeting held on Thursday, October 03, the views and suggestions of all the representatives of the foundations were received and the declaration of the Spiritual Assembly was read.

In the voting of the Preparatory Committee, which was held afterwards, as a result of the equal votes, the decision to continue the election process was adopted with the current conditions of the decree of the Ministry of Interior, which is the dominant opinion.”