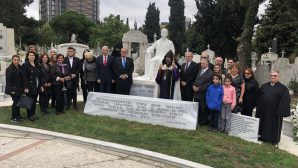 The statue of the well-known writer and author Hagop Baronian (1842-1891) was inaugurated on October 5 at the Şişli Armenian Cemetery in Istanbul. The inauguration took place in the presence of Bishop Mashalyan, the Patriarchal Locum Tenens of the Armenian Patriarchate of Constantinople. “Baronian is an author of the period of the revival of Armenian literature. His main role was to observe, analyze and correct, “said in his inaugural speech Bishop Sahak Mashalyan.

Who is Hagop Baronian?

Hagop Baronian, widely regarded as the greatest Armenian satirist of all time, was born in Edirne and died in Constantinople.

An influential Armenian writer, educator and social figure, Baronian was known for his scathing critique of leading figures in Constantinople Armenian political and social circles.

Baronian’s most famous work was the book Medzabadiv Mouratsganner (“Honorable Beggars”), which parodies the almost beggar-like state of writers and publishers in that period.

Unfortunately, he suffered the same fate as the characters in Medzabadiv Mouratsganner and died penniless, suffering from tuberculosis on the streets of Istanbul.

The Heritage of Armenian Literature: From the Eighteenth Century to Modern Times; pp 405-406

“In the 1870s he sided with Khrimian Hayrik in support of the revision of the National Constitution and criticized the corruption of Ottoman officials in the Armenian provinces. As the Balkans erupted into the rebellion that led to the Russo-Ottoman war of1877-78 (which in turn made the Armenian Question an international issue), he attacked Ottoman internal policy and exposed the hypocrisy of the European powers with bitter sarcasm. In 1883, in order to avoid censorship, he began to publish a weekly brochure called Dzidzagh (Sneer), in which the heroes, all national and international figures, were represented allegorically by animals derived from Armenian folklore, such as the fox, frog, ant, and monkey. The series lasted for only one year and his enemies declared victory.