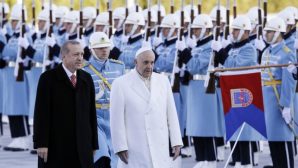 President Erdogan was welcomed with a greeting ceremony in front of the Apostle Palace, where he came to meet with Pope Francis. President Erdogan and his wife Emine Erdogan first met with Archbishop Georg Ganswein, Governor of the Papal Residence in San Damaso Gate. Following the welcome ceremony, President Erdogan went to the hall where he met with the Pope.

The Pope welcomed President Erdogan at the door at the Apostle Palace before the meeting at the Library Hall where he receives his guests. The Pope greeted the President Erdoğan Italian saying “Buongiorno” (Good Morning), and the President responded by asking “How are you?” President Erdogan, did a private meeting with the Pope and between the delegations. President Erdoğan said “Thank you for your interest” and the Pope expressed his gratitude for the visit. Later, President Erdogan and Pope Francis shook hands in front of the press members and went to the Library Hall where the independent opinion was made. The head-to-head interview, began at 11.53 pm and ended at 12.54. During the meeting which was closed to the press, Turkey-Vatican relations, Jerusalem related developments, regional issues, human tragedy in Syria, terrorism, issues such as xenophobia is stated to be discussed.

Erdogan gave the Pope the Italian and English prints of the Mesnevi and the Iznik miniature who depicted the old Istanbul in 24 pieces. The Pope also presented to President Erdogan a medallion symbolizing peace. Erdogan and the Pope informed each other about the gifts presented.

President Erdogan’s visit, is the second visit in the Presidential level from Turkey to the Vatican after 59 years. The first visit to the Vatican was paid by Turkish President Celal Bayar in 1959.

President Erdogan will meet with Italian President Sergio Mattarella and Italian Prime Minister Paolo Gentiloni for a working dinner in Rome after his visit to the Vatican.

The Feast of the Baptism of Jesus celebrated in Mersin