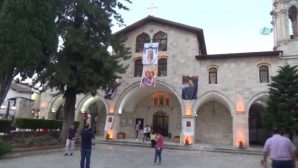 The Community of St. Peter and St. Paul Orthodox Church of Antioch Celebrated the Parish Feast

The feast of St. Peter and Paul was celebrated with the prayer of the Five Breads and the liturgy of the feast in Antioch St. Peter and St. Paul Orthodox Church yesterday.

The parish priests of the Orthodox Church of Antioch, Rev. Can Dellüller and Rev. Dimitri Doğum led the celebration where also the Latin Catholic Apostolic Vicar of Anatolia, Mgr Paolo Bizzeti attended.

The parish priest of the Orthodox Church in Mersin, Rev. Ispir Teymur spoke about the importance of this feast and mentioned the characteristics of St. Peter and St. Paul.

Rev. Teymur said: “We are together in the remembrance of St. Peter and St. Paul, the founders of our Holy Church of Antiochian Patriarchate. As the history of the church tells us, St. Peter and Paul seem to be on the frontline of the other apostles because of the talents they have; and the chapters we read today in our Holy Mass for these two Apostles characterize them as leaders of the Apostles and world ministers .

The Union of East and West…

These two Apostles are seen in many Christian icons, but most often they are depicted as hugging each other. These are the most common ones in our churches. Many scholars of religion argue different opinions about these icons. Some argue that the two apostles represent the peace they had after they conflicted in Antioch. Others argue that they represent an image of the unity of the Western world in the person of Peter and the Eastern world in the person of Paul. Another opinion is that both of them were martyrized in Rome. St. Peter was crucified, and St. Paul was decapitated.

These two Apostles occupy an important place both in the History of Church and in the Bible, with some special virtues they possess. We are praying for the intercessions of these two important apostles, which we celebrate today. We are also praying for the salvation and return to home of our dear Metropolitan Paul Yazici.”