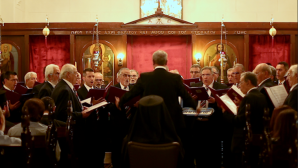 A concert was held in the Aya Fotini Greek Orthodox Church in Izmir on Saturday (November 24th) by Lavrion Polyphonic Choir, which is one of the oldest choirs in Greece.

Founded in 1939, Lavrion Polyphonic Chorus has performed in various national and international events until today. The concert was held on November 24that Aya Fotini Greek Orthodox Church. Many people also listened to the concert in which there was an intense participation.

Before the concert, the Chairman of the Greek Orthodox Community, George Teodoridis made a speech.“There are only two items in our differences; religion and language. When you take these two out, no one can understand the difference. It is only an Aegean Sea that separates us. In fact, this sea separates and unites us. It is the hug and tie that connects us. Today, we emphasize the communication, love, friendship and, most importantly, cooperation between the two peoples who have lived, live and will live in this holy land, against the continuation of vicious contradictions and skepticism climate” he said.

The concert started after the speeches; and the church chants were performed at the concert. The concert was led by maestro Theodoros Lembesis and endured for about one hour.

Altınözü-Sarılar Summer Festival was held with much entertainment