Celebration of the Birth of Christ in Samsun Catholic Church 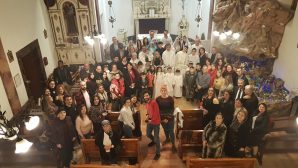 The crowded Christian congregation came together to celebrate the birth of Christ on the evening of December 24 at the Church of Our Lady of Sorrow in Samsun.

The ceremony was led by the Franciscan Fr. Adrian, accompanied by Fr. Marcelo, both from Argentina.

The ceremony began with the gathering of the congregation in front of the fire – a tradition of Iraqi Christians – and the speech of Father Marcelo. Father Marcelo said: “The grace of God, who brought salvation to all men, is manifested today! The mystery of tonight is revealed by the grace of God, and it is a totally free gift! The mystery emerges, the prophecies are fulfilled: it is the love of God that becomes visible in the child lying in the manger. God is here, let’s see him!” and then he blessed the fire.

The whole community then entered the church in a procession and chanting. Two young Iraqis performed a short demonstration as Mary and Joseph, a baby from the congregation as Jesus Christ, and four children as angels.

Three languages, Turkish, English and Arabic were used in the celebration. An organist student from Rwanda and the Iraqi choir performed the Christmas hymns in Arabic, Syriac and Turkish, adding color to the ceremony.

In addition, 4 students from the Visual Communication Arts Department of the Faculty of Fine Arts of Samsun University made video footage for the documentary about the city’s Christian history and churches.

During the reading of Isaiah 9 chapters 1-6, the symbol of light in the garden was told: “People walking in the darkness saw a great light!”

In his sermon Father Marcelo said: “Those who were comfortable in their homes hid their belongings. Instead, the shepherds sleeping in the countryside rushed to see him without any comfort. Also, let us answer the call of Jesus tonight, let us go safely to him from our borders, from our sins. Let us approach God, who is close to us, and when we look at Him in the manger, we just thank him! Thanks for loving us like this! Thank you, because you did this for me!” After finishing the sermon, he added: “I hope we are celebrating this Christmas together for the last time here and you may be able to go to the countries you have applied in the next year”.

Then he brought the baby Jesus in front of the nativity scene, put him in its place, and blessed him.

The first Catholic Church of Samsun was built in 1846 by capuchin friars from Italy in the same place. In 1876, Sultan Murad had given a special permission to build up a new church, and construction started 9 years later and lasted for about 4 years. Then it was connected the French Consul General in Samsun.

The church was closed in 2004 and reopened in June 2017. With the participation of Iraqi Eastern Christian families living in Samsun, this church continues its services and rituals. There are approximately 30 families as parishioners of Chaldean and Syriac Catholic origin; and a few African students consider it as their own home. Iraqi families from Yozgat travel for about 5 hours to reach this church. (SAT-7 TURKEY / Nathalie Ritzmann)