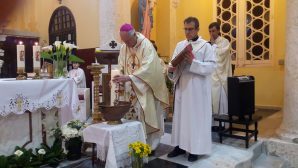 The Easter Sunday was celebrated with the excitement of the Catholics of Iskenderun in Antioch. The Apostolic Vicar of Anatolia, Mgr Paolo Bizzeti reminded that there is no place for fear in the hearts of the faithful and God is almighty.

The “Easter” Feast, which means of the resurrection of Jesus Christ, was celebrated in a magnificent mass at the Catholic Church of Annunciation of Iskenderun. The mass which took place at the Iskenderun Cathedral is attended by the Iranian refugees living in different districts and a tourist group of 60 people from Germany.

The Easter Mass began with the ceremony around the burning fire in the church garden. After the ceremony in the garden where the Easter candle was burned with the fire symbolizing the light of Jesus, all the members of the congregation entered the church under the leadership of the priests.

The priests and members of the congregation who entered into the darkened church enlightened the church with candles in their hands. During the mass in the church, the faithful prayed for the Easter to bring peace to the whole world, to remove people from misconceptions, illnesses, evils, mistakes, to bring health to patients and to bring refugees to their homes in peace.

During his sermon Mgr. Paolo Bizzeti reminded that there is no place of fear in the heart of the faithful and God is almighty.  Bishop Bizzeti also thanked the church chorus, who had been preparing for the feast for weeks, to make live with the Easter enthusiasm.

At the end of the ceremony, which lasted for about two hours, colorful eggs and Easter cakes were distributed to the congregation. At the end of the ritual, the German Tourists sang hymns in their own language by playing guitar. Then an Easter cocktail in the church hall was organized. Christian citizens, celebrating each other’s festivities, tagged the eggs with enthusiasm which are the indispensable symbol of Easter Sunday.

Police have taken extensive security measures in the Iskenderun Catholic Church as well as in all the churches due to the Easter holiday.