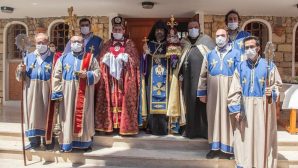 Due to the coronavirus outbreak, measures were taken, and the feast was celebrated with the participation of Turkey’s Armenian Patriarch Sahak II Maşalyan. During the feast, hymns were read, and prayers were prayed.

Verapokhum Surp Asdvadzadzni (The Ascension of the Virgin Mary to the Heavens) Feast was celebrated with enthusiasm in the Armenian Apostolic churches.

Surp Asdvadzadzin (Virgin Mary) Festival, the 4th of the five major holidays of the Armenian church, was celebrated with enthusiasm on Sunday, August 16, in churches with religious officials, within the scope of coronavirus measures. Turkish Armenian Patriarch His Beatitude Sahak II presided over the Sacred Offering Rite in the Surp Asdvadzadzin Church in Vakıflıköy, Hatay.

It was also the name day of the church and traditionally, hundreds of people from abroad and from the country attend the harisa festival and Sacred Offering Rite. But this year, due to the coronavirus there was less participation.

The Sacred Offering Ritual was performed by Father Avedis Tabaşyan, a religious officer of Hatay and its surroundings, affiliated to the Patriarchate Authority. His assistants at the altar were the subordinate deacons Ghazar Sabuncu and Arda Pınarcı, and the senior reader was Aren Kuş. The hymns were performed by Father Şirvan Mürzyan, senior reader Artür Bağdasaryan, readers of the church, Yusuf Tabaş and Misak Hergel.

Patriarch Sahak II preached in Armenian and Turkish after communion distribution at the Lord’s table. In his Turkish Sermon he said in summary:

“On this holiday, we celebrate the summary of Our Faith. For baptized children, the Godfather wants Faith, Hope and Love, why? Because in this world we live with them, and our life gains meaning with them. Jesus Christ asked those around him “who is my mother, father, brother? Whoever listens and does the word of God is my mother, father, brother.” Thus, Jesus Christ gave us great hope, if we listen and follow His words, we can become His mother, father, brother, sister. So what will happen if we are? It will be what we celebrate on this holiday. When the Virgin Mary died, when she fell asleep, they put her in a tomb carved into the rock, one of Jesus’ disciples could not catch up to see her, the others opened the tomb to see her face one last time, when they pushed the rock, the tomb was empty, just like Jesus Christ’s tomb was empty. Jesus Christ took his mother with him to heaven. The Armenian church also celebrates this event as “Verapokhum Surp Asdvadzadzni”, that is, the ascension of the Virgin Mary to the heavens.  Yes, we traditionally bless the grapes, but this feast is not called “grape feast”. Since Jesus Christ did not leave His Mother in death, he will do exactly the same to us. Jesus Christ said, “I am the resurrection and the life, whoever believes in me will live even if he dies.” “I have the key to death and hell.” “I am the way, the life and the truth.” That is when we set out to this truth, when we believe in Him, listen to his words and practice, when our hope becomes Jesus Christ, we will be the mother, father, brother and sister of Jesus Christ. “

At the end of the sermon, His Beatitude Sahak II rewarded the Turkey Armenian Patriarchate Hatay region chaplain Father Avedis Tabaşyan with “LANCHAHACH” (Cross-Medallion) for his services being praised not only by the Armenian community but also by all the Christian communities in the region. He also promoted Misak Hergel, one of the wise people of the village, who served as a reader to the church, to the rank of “senior reader” (uraragir tıbir).

After these ceremonies, they went to the garden of the church in a cortege, where His Beatitude Sahak II blessed the grapes and then the 7 cauldrons accompanied by harisa prayers, and then they were distributed to the public.

The ceremony ended with the wish of His Beatitude the Patriarch to meet next year in better conditions, free of illnesses. His Beatitude Sahak II later moved to the church hall, and accepted congratulations and visits.

His Beatitude Sahak II Made Official Visits in Hatay, Vakıflıköy

During the first visit at the Governorship Office, Governor Doğan, celebrated the feast of Turkish Armenian Patriarch His Beatitude Sahak II who went to Hatay for the “Virgin Mary Feast”. He expressed his pleasure in hosting the members of three heavenly religions, who succeeded in transforming their cultural and belief differences into a richness, in Hatay, where they live together in an environment of peace, love and tranquility.

Drawing attention to the environment of peace and brotherhood in Hatay, Governor Doğan said, “Despite the neighboring geographies where blood and tears are not lacking, Hatay is a very special province with its believers from different religions and cultures, I believe that the people of Hatay will preserve this exceptional union forever. I would like to thank all opinion leaders who contributed to the survival of this mosaic.”

Turkish Armenian Patriarch His Beatitude Sahak II, thanked Governor Doğan for his kind acceptance and invited him to the Surp Asdvadzadzin (Virgin Mary) Feast to be celebrated on Sunday, 16 August. He also congratuled Hatayspor, the team of the city of tolerance and brotherhood, on their promotion of the Super League.

“I would like to thank 85th Turkish Armenian Patriarch Sahak Maşalyan and his accompanying delegation for their kind visit to our city to make some visits.”

The traditional “Salt Blessing” ceremony was held on Saturday evening, 15 August 2020, under the presidency of the Patriarch Sahak II, on the occasion of the Feast of Surp Asdvadzadzin (Virgin Mary) and the naming day of the Vakıflıköy S. Asdvadzadzin Church.

After the “Evening Prayers”, the “Salt Blessing” ceremony was held in the courtyard of the church. This salt will be added to the traditional “Harisa” (keşkek) that will be cooked in seven cauldrons to be burned at night. Later, His Beatitude the Patriarch blessed the “Gochnag” (calling gong) placed at the entrance of the gate and rang it for the first time.

On the occasion of the Feast of the Ascension of the Virgin Mary, every year, salt blessing, burning of harisa cauldrons, grape blessing ceremonies continued to be maintained, although due to the coronavirus measures it was bittersweet with a small number of participations. Although there were no annual entertainments, the cauldrons were lit with the participation of the villagers, following the prayers of His Beatitude Patriarch Sahak II, with his first fire.